How to Keep dahlias in Winter.

Dahlias like the one in the image,  can be kept through the winter with a little bit of care.

Dahlias are tender plants and need special treatment in the winter months if you wish to keep them from year to year – or maybe even grow new plants from them in the spring. It is easy to keep dahlia plants through the winter.

As soon as the dahlias have finished flowering in late autumn – or right after the first frost, when they will be blackened – cut back the main stem to 6in (150mm) above ground level. Dig up the dahlias – they will be in a clump of tubers – and place upside down in a cool place to allow any moisture in the stem to drain away. 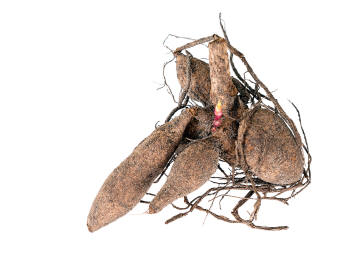 After a few days, the dahlias can be transferred to a box – place the right way up now – and lightly cover with dry peat – or old compost. Keep the dahlias dry, in a cool but frost-free place through the winter. A garage or a place under the greenhouse bench is a good place for storing dahlia tubers over winter.

As the temperatures start to rise in the spring, the Dahlias will often start into growth from in their storage positions. Try to keep as cool as possible to minimise the growth - unless you have suitable growing conditions in a protected greenhouse to allow the Dahlias to grow - preferably in a large pot. More often than not, the Dahlias will stay in their dormant stage until it is time to plant them out in their flowering positions - especially if you keep the tuber group and its compost dry.

You will notice that any growth that starts, will come from the buds at the base of the stem - and not the tubers themselves. The tubers are simply food storage roots that are modified to retain the food reserves in the dormant period.

Preparing for Propagating Dahlias from Cuttings and Division - In the early part of the year, if you are fortunate enough to have a heated greenhouse, the Dahlias can be started into growth in order to make side shoots. Cuttings of your Dahlias can be taken from these side shoots during February and March.

The Dahlia tuber clumps can be planted out again in late spring.

How to Grow Agapanthus Bulbs

When do you plant Allium Bulbs

Planting and Growing Anemones from Tubers

The 'De Caen' group of Anemones

How to care and Grow Begonias

How to Grow Camassia - Quamash

Planting and Care of Camassias

How to Grow Canna Lily Bulbs

How to Grow Chionodoxa Bulbs

The deepest blue is Chionodoxa forbesii

How to Grow Corydalis

How to Care for Corydalis Bulbs

Growing and care of Crocosmia

How to grow Crocus Bulbs

How to grow Cyclamen coum Hybrids

Planting and Care of Cyclamen coum

How to Plant dahlia bulbs and Grow Them

Care of Dahlias as they Grow

How to plant daffodil bulbs