Tall Flowers for the Garden. Plants with Spikes of blooms

The scope of this section about tall flowering plants includes those that either have tall flower spikes rising above non-intrusive foliage, or those that have flowers atop slender erect stems. For the most part, shrubs will be excluded having a section of their own together with perennial plants that have substantial foliage where the flowers are not held considerable aloof of the leaf canopy. We talk of tall flowers rather than big plants!

Our tall flowering plants are generally those which have either erect flower spikes or at least tell stems with a wealth of flowers at the top. The other criteria, is that the flower or flower stems will stand aloof of their foliage which is normally unobtrusive and does not detract from the main thrust of plants with tall flowers. 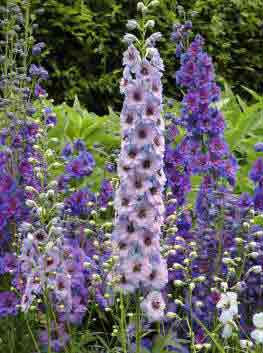 Two typical examples of those being the flower spikes of Lupins, which are most certainly held aloft of the basal foliage cluster, and the cloud-like floral display of the magnificent Verbena bonariensis, with its ground level foliage cluster - which is generally of no visual significance tall erect stems and masses of flowers at the top.

The following plants would generally be classed as having 'spikes' of flowers. Tall erect single stems generally clothed with individual blooms giving the appearance of a tall flower spike. Some such as the, Lupins - will have more than one flower spike per plant.

Plants with tall spikes of flowers.

My best twelve, but tomorrow it could well be different choices. Such a wide scope depending upon what you want to achieve in your garden or border layout.

It is not feasible to arrange in height order, as some such as the Verbascum group contain plants which can range from 2ft (60cm) to 8ft (2.5m) in height.

Delphiniums also, are variable between heights of 3ft (1m) and 6ft (2m).

Verbascum Mullein.
Height can vary between types. For instance the Verbascum olympicum can grow to height of 2m plus, with a dense rosette of attractive silver white foliage at ground level to Verbascum chaixii the nettle leaved mullein) that grows to around 1m tall. (Biennial or perennial types)

Alcea Hollyhock.
The skys the limit (almost) for the famed and loved Hollyhock.
This Tall flowering plant has erect stems of varied colours including white, yellow, pinks and deepest red. Single or double flowers.
(Biennial or short lived perennial)

Delphiniums
The Elatum group of Delphiniums have the tallest flower spikes.
The spires of blue flowers are legendry, often to 2m (6ft) tall with unobtrusive but attractive foliage at the base. (Hardy perennial)

Veronicastrum Culvers Root Flower
The first time I came across this choice, was in a woodland garden a dapple shaded opening.
It was standing 6ft tall (2m) and a dazzling sets of pure white spires. It can also have pink or light purple blooms. (Perennial)

Digitalis Foxgloves
The common Foxglove is the most widely planted of the Digitalis, but there are other types of note. In particular Digitalis ferruguinea or D. davisiana with similar height characteristics of 3-5 feet (1m 1.5m) flower spikes are worth growing. (Biennial but can be treated as short term perennial by cutting back after flowering)

Lupins
Cottage garden plant supreme, but that does not preclude planting in almost any other garden situation. Masses of flower spikes follow the main central spike (on young plants) whilst the older plants tend to send up clumps of tall flower spike in assorted colours. (Perennial or biennial)

Kniphopfia
Red Hot Pokers have to be included though the untidy clump of foliage that develops with age is not its best feature. But, the wide range of flower colours make up for that! Variable heights with some varieties barely making 3ft, but others such as K. Prince Igor being the tallest at around 6ft (2m) (Perennial)

Camassia Quamash.
Choose the right variety of this bulbous perennial (Camassia leichtlinii for me) and you will have 4ft tall spires of creamy white flowers with non-obtrusive basal foliage.

Campanula (Bellflowers)
There are several tall versions to chose from in this upright-growing group of tall flowering plants. For height, I like the Campanula lactiflora types of which there are several that grow up to 5ft, and flower for a long period. Campanula latifolia is different get the names right! (Perennial)

Eremurus Fox Tail or Desert Candle flowers.
The Desert Candle common name stems from the fact that it is best happy in dry conditions especially in the winter.

Almost goes without saying, that it adores the sun. Varieties from around 4-6 feet of true flower spikes. (Perennial often sold as dry-pack roots in autumn.)

Acanthus spinosus I think the best. Plenty of foliage.

Bicolor flowers if you include the bracts white and mauve in total.

Lysimachia Loosestrife
This shares a common name not unusual but highly confusing with the plant listed below. Different families, and colours, but both well worth considering in differing areas. In this group, it is quite important to get the names right or you could end up with a trailing plant Lysimachia nummularia; a tall but drooping flowered type Lysimachia clethroides; or the L. ephemerum white flowers and height to 3ft; or L. punctata yellow flowers on spiked stems, together with its attractive variegated form. (Perennial)

Lythrum Loosestrife.
For pink flower spikes, this is a good choice especially in damp. Saw a magnificent clump of red flower spike on Purple Loosestrife - Lythrum salicaria Firecandle at the edge of a pond, at near to 4ft tall. L. virgatum rarely gets to more than 3ft, but is also a superb pink. Clump forming with spikes of deep pink flowers

Others worth considering or even including.

Linaria Toadflax.
Liatris Blazing Star or Gay Feather Plant. The tallest one is L. pycnostachia Kansas feather at up to to 5ft, but the most popular is the shorter Liatris spicata neat, tidy but under 3ft.


Penstemon Everyones favourite for tall flower spikes but for this list.
The foliage is too intrusive.
It is still one of my favourite perennials.

Agastache well worth growing if you are not after too much height.
Eucomis Spikes but not height!
Sisyrinchium Good flower spikes but not the height for this list.
Veronica Superb but lower growing
Aconitum Not truly spike flowers but well worth including in some projects
Heuchera Shorter growing but fills all the requirements
Phygelius comes with abundant foliage but also with upright flowers of note and long flowering period.
Tiarella For the lower growing projects
Veronica Good upright flowers with deep blues lacks height for this selection
Malva Mallows are variable upright to bushy but good plants for long display.
Physotegia Obedient plant - sometimes gets to near 3ft!
Tellima I like this but could not include because of lack of height
Hyssop clusters of upright flowers
Phlox Upright flowering garden perennial, with bright flowers. Whites through to deep pink.


Anchusa erect flowers of vibrant blues. Not really spikes though!

Cimicifuga stunning upright flowers with a wealth of attractive foliage at base.
Crocosmia Clusters of upright but lax flowers.
Verbena bonariensis. None more upright insofar as the stems are concerned, but with a cloud of flowers at the top. Very usable!