Low growing, spreading perennial plant with spectacular colored foliage – Houttuynia Chameleon - The Chameleon Plant - derives its descriptive name from the fact that it changes colour frequently through the growing season. It is also known as Houttuynia ‘Tricolor’.

The heart-shaped leaves are generally green centered, with cream edges, but are splashed with various shades of red and orange – especially the younger leaves.

The parent of the line – Houttuynia cordata – has some interesting uses throughout Asia – using the name in China of "fishy-smell herb"; whilst the Japanese are happier with "poison blocking plant". It has several uses raging from medicinal to culinary in most areas of the continent. H. cordata is the normal green leaved type – rarely grown for ornamental purposes – though has good ground covering uses – especially in damp areas where the underground rhizomes help it to spread in good conditions. 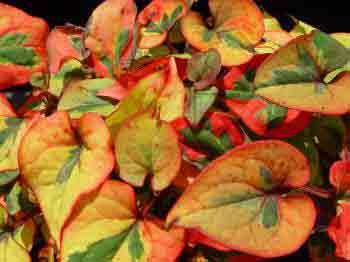 Houttuynia cordata ‘Chameleon’ is an herbaceous perennial growing to max height of 12in (30cm) though the spiky clusters of insignificant (my opinion) white flowers may exceed that slightly. ‘Chameleon Plant’ is sometimes sold for ground cover. It certainly spreads a little but should not be planted for the purposes of smothering weeds. Far better to grow it for its better value of a foliage perennial, which will send up a few ‘extensions’ from the main clump by way of its creeping underground rhizomes.

Front of perennial and shrub borders are best places, where it can be allowed to meander through neighbouring plants over time. It is especially good and colourful in dappled shade – tending to suffer a little leaf scorch in full summer sun, though in too shady a spot, the variegated foliage can turn green.

Houttuynia is not really suitable for container displays for the reason that it will be difficult to keep the soil moist at all times.

Slightly acid soils are preferred though will tolerate a degree of lime in the soil – particularly if given an organic mulch each autumn.

The one essential is that Houttuynia should not be planted in dry areas. It may live for a few years in such situations but will not thrive. Though hardy in the right conditions, it will relish a winter mulch to protect the roots from iced soils.

Houttuynia cordata ‘Chameleon’ is also a good marginal pond plant – doing well in water depth of up to 4-5in (20cm) of water. Better still, it will always be happy as a bog plant. Bear in mind that it is herbaceous and will die down late autumn. If grown in a depth of water the dead foliage should be removed before rotting away under water. At the bog side, it may be preferable to allow it to die down and replenish the boggy soil.

Any browning of the leaves is more likely to be as a result of hot sun. However, soils which are alkaline can also induce leaf browning. At the start of growth in early spring – and as new shoots appear at ground level. Slugs can take a liking.

There are no known diseases for this plant.

Cuttings are possible but difficult. A far better option is to divide the plant in early spring or cut off some wandering clumps with a sharp spade and re-plant where desired.