Calceolaria – The Slipper or Pouch Flower


Calceolaria plants - slipperworts or pocketbook plants - can be used as garden plants in some instances, though some calceolarias are more popularly grown as short-term flowering houseplants – especially for the winter months. The calceolarias used for bedding and houseplants are annuals - propagated from seed.

Calceolarias belong to the plant family of Scrophulariaceae - as do the Foxgloves.

They have attractive, somewhat unusual flowers – resembling pouches drooping from the ends of upright stems, with colours varied and often spotted. Newer varieties are normally quite compact, forming a dense mound of foliage and flower. Slipper flowers are increasingly being used as summer bedding plants with a range of bright colours including lemon yellow, orange, bronze, and also with contrasting spots on the flowers.

In spite of their delicate appearance, Calceolarias are quite hardy – even to the extent of surviving near-frost temperatures. Native habitat being the cooler shaded areas of plains and open areas in central Americas 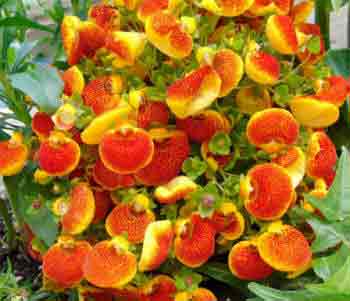 Basal cluster of leaves form a dense cover which are almost self mulching.

Generally, calceolarias are happiest in full sun growing in dry conditions when grown as a summer annual bedding plant.

When grown indoors, they should not be situated on a windowsill attracting midday sun.

Very good as container plants – allowing space for the ultimate spread. Water regularly and week feeding from time to time through growing season

All calceolarias can be grown from seed – cuttings are not possible other than for the few specie types.

Sow the fine seeds on the surface of your tray of compost – either in early spring to use as summer bedding plants, or late autumn and overwinter in cool – not cold – glasshouse.

Pests - such as aphids either indoors or outdoors – whilst whitefly and red spider mites sometimes a problem when grown indoors.

The broad covering of the leaves make a good hiding place for slugs but damage is normally confined to the early part of the growing season.