Fuchsia plants are either classed as shrubs or perennials, and can be fully hardy or tender – and several other classes between, depending upon where you live and how you are going to grow them. Most of the common bedding plant fuchsias are tender or half hardy perennial shrubs - either small bush or trailing types – together with half or full standard Fuchsias.

For general use, fuchsias can be split into four separate types – Hardy shrub Fuchsias; half hardy bedding fuchsias; trailing and standard fuchsias. There are also various classifications as to flower type. This section is for the varied general garden uses for which Fuchsias are normally bought.

All have common flower attributes – with variation – of drooping or pendant tubular flowers, which can be either single, semi-double, fully double or the longer tubular tryphilla group. There are literally hundreds of varieties to choose from – especially with the half hardy perennial bedding types. 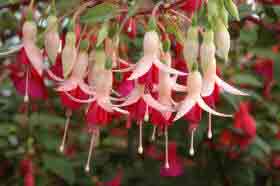 There are Fuchsia Societies in many countries together with which ‘Fuchsia’ is a specific colour in the printing and fashion trade – being best described as a magenta pink. This does a great disservice to the wide range of colours associated with these plants.

The common and botanical name of Fuchsia sometimes gives rise to a variety of misspellings. Easiest way to remember, is that the plants were first discovered by Leonhart Fuchs, the German botanist and plant collector, to whom we are indebted.

Where to Grow Fuchsias

A basic requirement for a continuing display is a sunny place – though preferably with some shade from the hottest midday sun. Alternatively an area which has plenty of light, but the hardy shrub fuchsias are happy in full sun or dappled shade.

Fuchsia resent being grown in windy, exposed, draughty or heavy shade, and if planted in the garden, a medium soil type is fine – but never waterlogged.

Most of the semi-hardy types of Fuchsia plants make good container plants and are also suited to window boxes – but preferably not on an exposed wall – or one that faces the midday sun. The popular trailing types of Fuchsias are perfect in outdoor hanging baskets and make superb cascades of long lasting flowers if used beneath pergola beams.

The hardy types are often used as hedging plants - particularly in seaside areas. Once established they can form a dense hedge up to 6ft (1.8m tall).

Walls or good sturdy fence panels or trellis bedecked with assorted Fuchsias is a great way to utilize space – vertical gardening at its most basic and masses of colour for most of the summer.

Trailing Fuchsia baskets and pots can also be grown hanging from the low ranches of light foliaged trees such as Birch, Sorbus and Robinia if placed to the outer perimeter where they will normally get good light and at rhe same time a modicum of dappled shade.

Once you have grown Fuchsias, the question ‘why?’ does not arise. They are amongst the most sought after summer flowering plants for gardens, window boxes, baskets and patio pots and containers.

They need minimal attention and care for success; which is not to say that they can be planted and forgotten.

The main attractions of fuchsias are their longevity of flowering period – normally from early summer through until frosts of autumn; easy to grow, and ‘renewable’ by keeping them through the winter to plant out again the following year.

Fuchsias are non-demanding garden plants or shrubs which can be grown in garden beds, shrub borders, hedging plants, patio containers in all manner of garden pots and of course their popular use in hanging baskets and window boxes.

Not to be forgotten, is the fact that as well as providing a super flowering display, there are some notable foliage feature fuchsias that are worth growing – variegated, golden or deep bronze foliage form good contrast to the drooping cascade of the brightly coloured flowers.

When to Plant Fuchsias

The bedding or half hardy fuchsias which are the mainstay of the fuchsia group should not be planted out in the garden until frosts have finished in late spring. The same goes if you happen to buy hardy types full of flower in early spring, for these would have been grown in protected conditions in the nursery in order to get them flowering and looking good for the traditional Easter gardening trade.

Other than the true hardy fuchsias, any plants that you wish to ‘preserve’ for the following year should be lifted from the garden before harsh winter weather starts. In milder areas some borderline varieties can be left in the garden and simply protected at ground level with a good covering of retentive mulch. An area that it traditionally wet during the winter would not be suitable so lifting and storing for the winter would be the best option.

These are suitable for growing in the garden all year round – though deciduous and lying dormant for the winter. Normally cut to ground level each spring, they will soon re-form a shrub which is several feet high and full of flower from midsummer onwards; absolutely excelling in the later months and through until autumn frosts.

Half Hardy Bush or Bedding Fuchsia

As the name suggests, this group are small woody stemmed plants which are sold in garden centers during spring and early summer – or can be bought online – for use in bedding plant schemes in the garden or more popularly as container plants for the patio or window ledges. They are not reliably hardy so can either be discarded at the end of summer, propagated for use the following year or over-wintered in frost free conditions – ready to start life anew the following spring.

These are much the same as the bedding or bush varieties with the added attraction of a loose habit of growth ranging from drooping branches to fully pendant weeping steams that – when planted in a hanging basket – can from a drooping cascade of colourful flowers down from the basket – as much as 2ft (60cm). They can also be planted quite effectively in pots atop a pedestal, though need to be firmly anchored to cater for the sheer weight of flowers – especially in a sudden breeze!

These spectacular forms are normally of the bush types above, which have been grown for a year or more at the nursery and trained to grow up one central stem – somewhat akin to a standard rose. They are not hardy, so will require winter cosseting – and if planted in a patio pot will need support and shelter to ensure they stay upright. If they fall over, the heads often suffer considerable damage – though soon re-form their former glory.

If planting in the garden – such as a mid-bed feature, consider just plunging the pot below earth level rather than removing the pot and plating as per normal shrub. This will make them much easier to ‘harvest’ in the autumn when they will need to be bought under cover for the winter months.

Problems and Pests of Fuchsias

Other than the main cultural aspects covered above, Fuchsias are susceptible to aphids – whether grown indoors or outdoors.

Red Spider mites and whitefly in particular can be a pest when grown indoors – especially at the start of the growing season in a greenhouse.

When grown in pots, they can suffer from vine weevil beetle larvae nibbling away at the root system – leading to a collapsed plant. Potted plants which have been overwintered under cover are also prone to this invidious pest.

The main disease – though not common is that of Botrytis or grey mould – especially in the early part of the year or with plants emerging from winter dormancy in the greenhouse.