Page 6 of the decking project - showing the fixing of deckboards with screws and power driver.

There are special screws which should be used for fixing deckboards to joists. Simply buying galvanised or zinc coated general purpose screws is not generally satisfactory. It is important that the screws are manufactured for long term outdoor exposure and that they are coated in such a way that the 'protective' coating is not abraded off during the screw driving operation. Stainless steel screw are by far the best and only add a small cost to the job.

6mm dia screws are the norm, and can be screwed direct without any splitting of the board. The only exception being at the end of a board, where it might be necessary to predrill the holes in the deckboard. 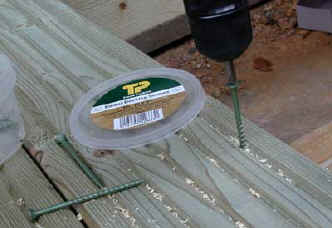 Choice of screwdriver is down to whether you hire or buy. The modern cordless screwdrivers with hammer action and adjustable clutch are good starting points. No need to be dragging a power cable behind.

If the power drill has an adjustable slip clutch, take time to adjust it so that it eases off at the pot where the head of the screw makes contact with the deckboard.

If you do them hat way there is less chance of driving the screw in too far and either burying the screw or splitting the deck boards.

Many screws for decking will have ridges on the bottom of the head, which helps the screw to counter sink without too much effort.

Decking screws will have a clear shank at the top - which should be the depth of the deck board of choice. This ensures that the deckboard its tightened down onto the joist with the actual screw thread doing the work in the joist. Non purpose made screws with a fully screw faced shank should be avoided.

75mm long screws are suitable for most softwood decking and having diameter of 6mm. The larger 8mm screws will invariably need pre-drilling, and are prone to splitting the boards if not. 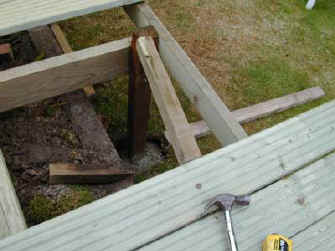 Screws take longer to use use than decking nails, but if it is a one-off deck for yourself, the cost is negligible in that you will not have to hire a power nail gun - nor buy nails in a greater quantity than you need! generally the pro decking installers use nails for speed and to a certain extent, the visual effect. The rail head is driven down below the surface of the timber. A neat row of visible screws as also a pleasing sight.

Take care to get the rows of screws in a straight line - even to the extent of a light marking with straight edge and soft pencil - or better still - a chalk impregnated line snapped down on the board surface.

Back to Decking Project Main Page