Pruning Clematis - How, when for best results.


Clematis are normally grouped into three distinct sections for pruning. If you are going to prune clematis, then it needs to be carried out correctly.

However, as with many other shrubs, many clematis do not 'have' to be pruned. But in normal garden conditions, pruning of Clematis is a 'must'.

When you should prune Clematis montana, Clematis armandi - the evergreen Clematis.

It is important to remember with these Clematis varieties that of they are to be pruned, then it must be right after flowering. If they are pruned back too late in the year, then they will not have time to make the flower buds ready for the following spring. Pruning normally takes the form of 'tidying' the plant, or bringing it back under control perhaps.

It is as well to have a good look at these varieties of Clematis at flowering time, to try to visualise what amount of growth they will put on during the coming summer growing season. If you feel that it is going to need cutting back sometime in the year, then best to do it early and not leave it too late in the year.

Late pruning will not harm these Clematis -simply delay the flowering, so that you will maybe not get any flowers for two years!

Pruning this group Hard - to rejuvenate.

This group of Clematis can be pruned - cut back - hard if desired, in order to rejuvenate it, or to get rid of older woody stems. They will soon re-sprout into growth, and the worse that will happen is that you may just not have quite as many flowers the following year. However, the year after that they will flower as normal.

This Clematis group are pruned at a different time. The group includes the large flowered hybrids that start to flower in May and June. It includes some of the best known varieties of Clematis. These clematis flower on stems made in the previous season. From these stems, they send out new shoots which will bear flowers through May until Mid summer.

If this group is cut back too hard in the spring, then you will be pruning off last season's stems - Result = no or very few flowers. You need to leave a framework of last year's stems, so that buds can grow from these old stems, which will send out flowering shoots.

The purpose here, is to build up a framework of stems from the last season. So once established, the pruning back should be confined to cutting out old and damaged, stems, then heading back the remaining stems to suit - probably 1 or two metres from the ground. This will leave plenty of flowering buds to emerge form the old stems. You can also just leave the plant alone and not bother with pruning - especially if it is growing up through a tree.

Typical varieties in this group are:

There is - or should be - no secret as to how these should be pruned, but first let us understand how they grow!

These large flowered Clematis hybrids, flower on growth made in the current year - not in the previous year like the first group. They should normally be cut back quite hard in February or early March. Cut back to a pair of healthy buds which will just be starting into growth in a normal February. This hard cut-back, will invigorate the plant and result in good strong new growth (Which will flower later into the summer!)

This group should be pruned back to within a 30cm (12in) of the ground each February/March. This will remove all of the previous season's growths and stems. You are effectively left with a few stumps of the old stems - cut back as outlined. do not worry - the Clematis will soon put on a few metres of growth within a month or so of pruning. 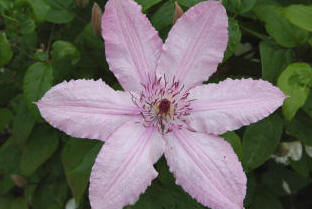 This group contains many of the favourite large flowered Hybrids such as ...

Hopefully this will give you a better idea about when you should prune you Clematis.

Clematis Wilt Pruning If your Clematis suddenly wilts, and foliage dies, this could be signs of Clematis Wilt. Prompt action, pruning out all dead and dying stems back to good healthy tissue will often help the plant to recover.