Evergreen foliage shrub, with variegated leaves, the spotted laurel is totally hardy in the UK, and will grow almost anywhere in the garden. Therein lies one of its problems of being taken for granted!

It is one of the best shrubs for tolerating shade, but will also grow without problem in full sun. Aucuba is a densely foliaged shrub, giving total shade under its foliage canopy, so has obvious uses for ground cover.

Ultimate height of this shrub is normally around 1 5m height and spread, but will grow larger in optimum conditions. Happy in dry soils; happy in dense shade; happy in partial sun; happy soaking up air pollution; happy in either lime or acid soils.. Welcome to one of the most non-temperamental shrubs – Aucuba japonica, the spotted laurel.

Aucuba japonica is grown as a foliage evergreen, but is also quite spectacular in berry. It is a dioecious shrub, meaning that male and female flowers are produced on separate plants. One of the best specimens I have ever seen was grown in dappled shade with masses of bright red berries contrasting with the foliage. I was never able to locate a male plant in the vicinity, so have often wondered as to the validity of it supposed single sex plant! 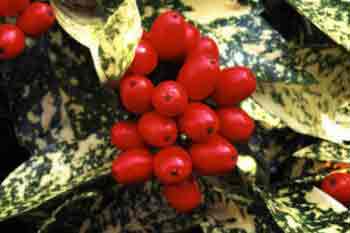 The spotted laurel – Aucuba japonica – is probably one of the most maligned evergreen shrubs that ever existed. Why? Because it is one of those shrubs which are tolerant of almost all growing conditions, so are frequently grown in hostile environments and are rarely thought of as superb foliage plants in their own right.

Most other shrubs which are subjected to the same abuse would probably die off in a year or so and would not therefore be associated with such conditions.

Aucuba japonica is a survivor, so gets noticed struggling against the odds. The Japanese Spotted Laurel deserves to be known for what it is; a brightly-coloured evergreen foliage plant which should have a place in most shrub-planting schemes, including windbreaks and hedge – or even as a specimen in a patio pot.

The variegated Aucuba also has another use – that of a houseplant which is dealt with elsewhere.

Can normally be planted, watered well in with subsequent watering until established, then left to its own devices to get through life and at the same time reward you with a year-round interest with its variegated foliage.

Water when needed throughout the growing season. The drooping leaves will alert you if it is thirsty. An annual mulch helps – as with most shrubs – and certainly if grown in a dry shaded place. Feeding is optional, but best to give a long term slow release fertiliser at the start of spring. This will be well repaid with brightly coloured new foliage. The feeding is more essential if grown under the shade of trees, which tend to have first option on any water of food supply owing to their larger root systems.

Plant your spotted laurel in a large container using a 50/50 mix of peat-based potting compost and loam compost - such as john Innes. Feed once a year with Osmocote pellets or plugs, and keep well watered for the best foliage effect.

Though full hardy, Aucuba can be damaged if the pot gets frozen in winter, which will cut off the water supply if the foliage is being dried out by drying winds or winter sunshine days.

Growing the spotted laurel as a garden shrub, you will be unlikely to be subject to any problems pests – not even aphids or slugs.

Rarely there can be varied leaf spots – mostly harmless. If these are plentiful and black, then take off the affected leaves and burn, then treat the shrub with a general fungicide.

Generally, Spotted Laurel is a versatile shrub with no problems.

Look no further than taking semi-ripe cuttings in September, and placing then in a pot of sandy compost in a cold frame.  They will root well before the onset of winter, but best left protected and undisturbed until early spring. Pot them up individually in medium sized pot to grow on for a few months before planting out.

Not normally required, but if so, can be cut back – even severely – in early spring. This is also the best time for trimming and pruning Aucuba hedges.