Most raised decks need a set of steps or often a proper set of decking stairs to get access to and from the deck to a lower garden – or sometimes to a high level door – dependent upon where the deck fits to the house. Some houses at the rear garden have a floor level which is much higher than the garden – which sometimes slopes away from the house.

The examples on this page are of very basic deck steps – quite easily constructed using pre-made ‘stringers’ which will be sold at most builder merchant or your normal deck timber supplier. The stringers are pre-made, taking into account the rules and regulations for tread width and riser height which will be a necessary consideration if building controls are involved.

Decks can sometimes not be signed-off by a building control inspector if the dimensions for treads and risers and also the angle of the steps do not conform with building regulations. Basically the same criteria are adopted as for full staircases in the house. There is no different specification for deck staircases.

Sometimes there is a single step required down from the deck to the garden. This is easily achieved by building a box frame from the joist timbers (6x2in – 150x50mm) and fixing deck boards to the surface. Aim for 12in 30cm depth which is normally ok for two standard deck widths. Even though it is just a simple single step, the box base will need to be secured into the ground – NOT free standing. Over time there will be wear under the fra,work, leading to an unstable, rocky step.

Building a deck staircase – or even a few steps - is invariably the most difficult part of the deck construction to get right. However small the set of steps are, safety should be the first consideration. This starts with proper construction giving a rigid project, and by ease of use which will be defined by the building regulations. Even if you do not need building control permission, it is as well to adhere to the rules and regulation relating the staircase provision and Steps will or should be accompanied by some type of handrail and again, there are regulations that need to be adhered to for handrails. 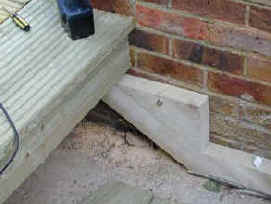 In the example images we have used simple pre-formed stair stringers; by far the easiest way for a deck with a height of up to 90cm (3ft). An added advantage of using deck staircase stringers is that the staircase can be built using your deck surface as a workbench (nice flat even surface) or if you are not used to bending and kneeling down yet (!) a moderate size set of steps can be built on a sturdy workbench. You can also build the steps in-situ after firstly securing the stringers to the deck and ground.

Decks higher than 90cm – 3ft off the ground will need a different approach to staircase building. 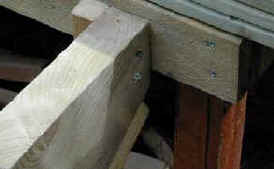 For support reasons, the ground fixing is very important for you do not want your steps sliding away from the deck over time. With good ground support, the stringers can be simply resting against the decking fascia with minimum fixings – just a few screws.

The support posts concreted into the ground will also provide a good non-giving surface on which to base your newels - assuming you are going to incorporate a balustrade or even a hand rail - IMPORTANT even for a few steps down - or up. 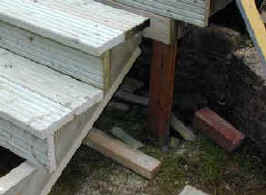 A standard deck staircase stringer will have been manufactured to take a single 6in deck board as the riser, and two deck boards as the treads – allowing for a slight nose over the front edge of the tread. This can be clearly seen in the side view image of the steps. It is important not to have too much overhang for the nose of the tread or tripping can be the result.

If your deckboards are not as wide as the standard 6in boards you should always have a full deckboard width at the tread leading edge, and any in-fills of differing width can be situated in the main depth of tread. Together with that, you will have to accommodate the 'give' in narrower boards when used on the treads. 150x40mmdeckboards can normally be used with a 90cm span. The give extra stability to the treads, it is a good idea to use an off-cut deck board or joist under the tread as a central strengthening extra. 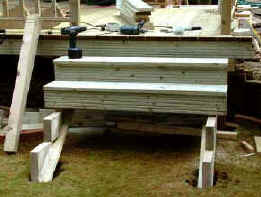 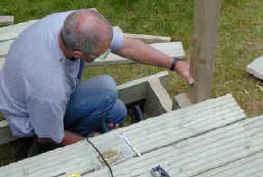 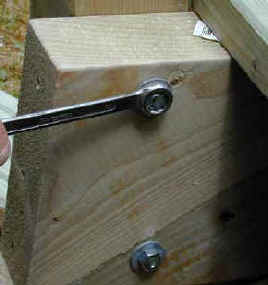 Staircase ready for fixing of the newels. The overhanging treads will need to be cut in around the newel - or simply trimmed off flush with the stringer surface. Overhang looks better and can be further enhance by using a fascia deck board on both edges attached to the stringer.