When we talk of boring beetles, we are not referring to general demeanour, but of the nasty habit they have of boring into plant stems to obtain shelter and food! They are grouped together as Bark Beetles or Shot Hole Borers. Bark Beetles are a serious pest as they cause damage - often death - to a wide spectrum of tree types.

Bark Beetles main claim to fame was as a result of the Dutch Elm Disease infestation. This was essentially a fungal disease that was spread from tree to tree rapidly by the Elm Bark Beetle. There are many others which are specific to tree types such as the Ash, Sycamore and Spruce Bark Beetles.

Shot Hole Borers is the generic name, as they leave a trail of small holes in the bark of trees, resulting from their boring into the bark layer in order to get at the soft tissue underneath the cambium layer where they feed and lay their eggs unseen for the most part until the tree limb or the whole tree starts to wilt normally early to mid summer 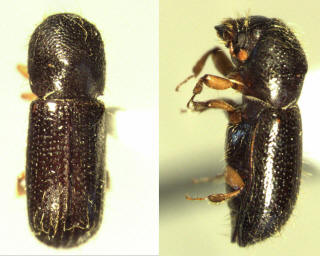 The Small holes peppered into the stems and bark of trees are typical sign of the shot hole borer. There are several types, of shot Hole Borer Beetle, and perhaps the most damage done to date, was by the Elm Bark Beetle which was responsible for spreading the deadly Dutch Elm Disease throughout Britain. It goes without saying, that any Shot Hole Borer, or Bark Beetle must be taken seriously.

The images are much larger than life-size, for the beetles are normally just 6-8mm long, depending upon type.

If you fnd regular shaped small round holes in the bark of any shrub or tree, then any badly affected branch should be removed and burned. There is no available practical solution for this boring beetle. It affects trees of all ages, and the Elm population that once was, is testament to that.

There are many different types, but all are either brown or black, and are no larger than a good grain of rice! Not the type of thing that you will notice unless hunting for it. They are sometimes noticed on young foliage as the beetle colouring stands out against the light green. The Bark Beetles do not harm foliage directly, but rather, cut off the food supply to the leaves by interrupting sap flow throughout the life support od the tree the Cambium Layer. (Immediately below the bark, and between the bark and the wood proper.

The Larvae - grubs - of the Shot Hole borers live in the tunnels they create as they eat into the important cambium layer under the bark.

Encourage healthy tree growth and regularly remove any dead wood will do much to keep this pest controlled. Whilst the keeping of log piles in the garden is seen as an environmental plus, be aware that Shot Hole Beetles can use this wood for breeding purposes. When the adults emerge, they will attack nearby healthy trees.

The bark beetles have also been found in old poorly specified pallets, where the softwood timber used still had bark strips attached.

These Chemicals are:- lindane (also known as gamma-hexachlorocyclohexane (γ-HCH)), chlorpyrifos (Chlorpyrifos is an insecticide that is a white crystal- like solid with a strong odor. It does not mix well with water, so it is usually mixed with oily liquids before it is applied to crops or animals. It may also be applied to crops in a capsule form. Chlorpyrifos has been widely used in homes and on farms. In the home, it is used to control cockroaches, fleas, and termites; it is also used in some pet flea and tick collars. On the farm, it is used to control ticks on cattle and as a spray to control crop pests.) and fenitrothion (Fenitrothion is a brownish-yellow oil)

The Costs of bark beetle control are an important factor in deciding which chemical to use, or if any chemicals will be used at all.

Not all of these products are available in certain countries, for environmental reasons they have been banned. Alternatives are available but may not be as effective.

All Garden Pests in Alphabetical Order